skip to main | skip to sidebar

just in from Rebecca in Western Australia...

I have two photos of an awesome house of tyre swans! From Jurien Bay
in WA. We passed it while lost, and I made my husband turn around so I
could take photos of it.

Wish I could give you more information, but I was so excited to have
passed a *house* of tyre swans, I just had to share. 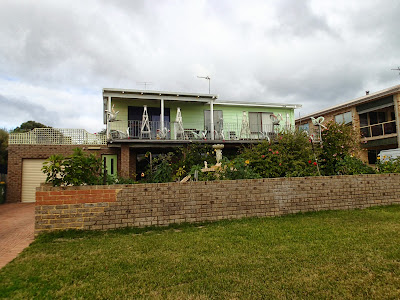 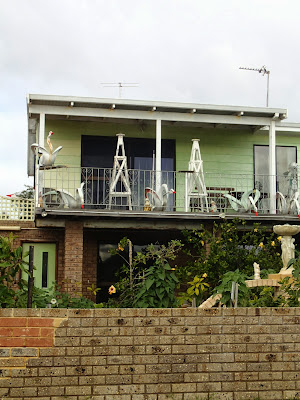 Posted by Cathy Parry at 7:51 am No comments:

Posted by Cathy Parry at 8:05 pm No comments:

photo by Sarah, in Tasmania. No other info I'm afraid. 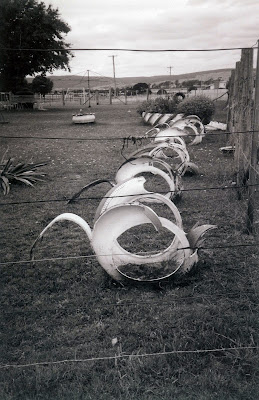 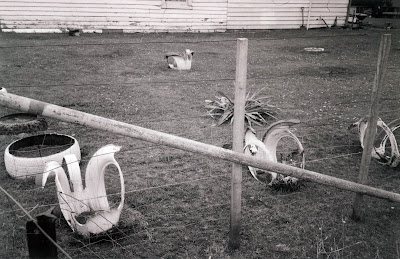 Posted by Cathy Parry at 8:02 pm No comments: 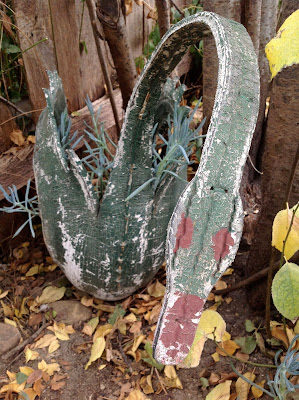 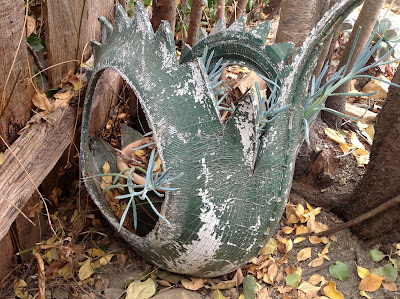 
I always wanted a tyre swan and was lucky enough to be given a forlorn specimen. I just finished restoring it, grinding decades of paint layers off, repainting and giving it new life as a much needed herb planter. My 8 year old has named him Herbet and he was just completed and planted last night!. He was found in Bayswater Vic and has found a forever home with us in Langwarrin Vic.
Here are some before and after pics.
Cheers,
Belinda.
PS...Need to find him a mate...it's hard to stop at one! 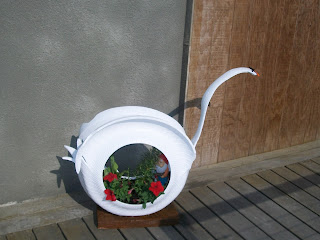 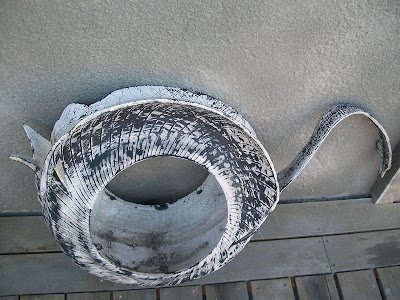 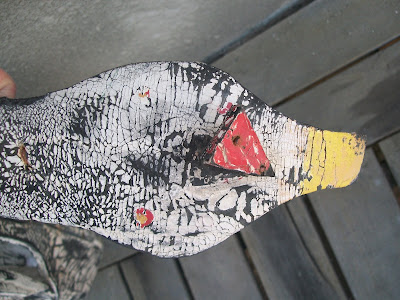 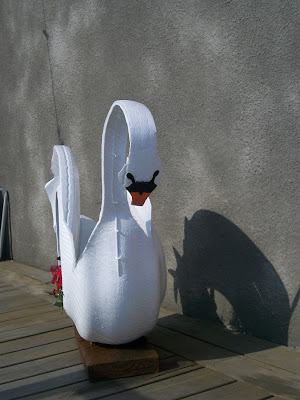 A contribution from Darren in Adelaide, South Australia.
"My father inlaw loves the old tyre swan we made some out of quad tyres with the kids. They loved it and they turned out great, your instuctions helped a lot thanks darren" 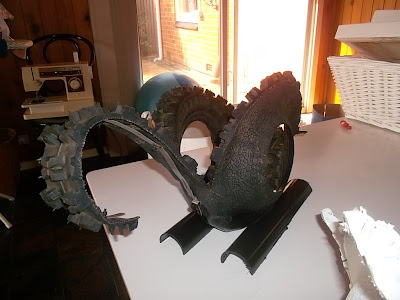 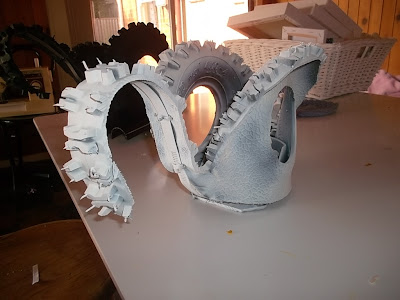 Made by Dorelle and James

Dorelle sent us this photo of a tyre swan James made recently. It is very beautiful and elaborate. 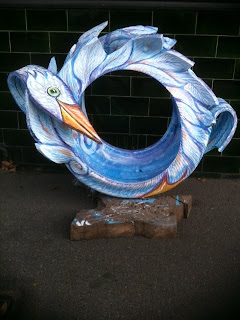 Posted by Cathy Parry at 5:24 pm No comments: 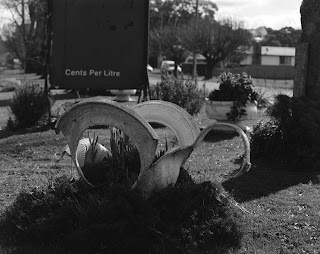 Round up of the Rylstone Tyre show with swan making tutorial (video)
Posted by Cathy Parry at 8:57 pm No comments:

the most serious tyre swan making I could have imagined.

Not just an Australian phenomenon?

This extract of an interview by Tim Milfull with Adam Elliot (Max & Mary film) sheds a little mysterious light on the history of the tyre swan.

TM: It’s quite extraordinary watching the opening sequences—you chose a lot of iconic images of Australian suburbia that are so beautifully rendered.

AE: Look, I really wanted to get all that stuff in, and there was the danger of it becoming a big cliché, which is why we didn’t have kangaroos jumping down the street. But there was a koala letterbox, and a tyre swan, and I thought they were very Australian. But I actually found out showing the film at Sundance and in Germany that they all said, “Ah, yes, very German suburbia.” I said, “Really?” And the Americans said, “Oh, yes. We have tyre swans too, and totem tennis poles .”
Posted by Cathy Parry at 5:19 pm No comments:

Email ThisBlogThis!Share to TwitterShare to FacebookShare to Pinterest
Labels: history 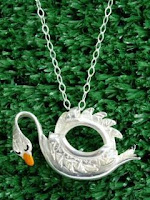 Victoria Mason has made a beautiful necklace based on a tyre swan.
Posted by Cathy Parry at 4:55 pm No comments:

Tyre Swan in the collection of the Powerhouse Museum, Sydney NSW. Formerly of a lawn in St Marys, Sydney. I can't get a picture for this blog, so you'll have to follow the link. It's very beautiful. Thank you Mr & Mrs Johnson.
Posted by Cathy Parry at 4:29 pm No comments: 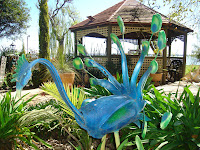 Photo sent by Karen on holiday at Ski land in Yarrawonga.
Posted by Cathy Parry at 5:43 pm No comments:

Email ThisBlogThis!Share to TwitterShare to FacebookShare to Pinterest
Labels: example

The Canberra Times
Plenty of rubbernecking as crowds fail to tyre of 1970s-era swans
By David Seale
Thursday, 14 October 2004

There was plenty of rubbernecking yesterday at Floriade as a 100-strong flock of black Australian native swans nestled on the grounds of Commonwealth Park.
The birds were of the kitsch 1970s variety, made from old cross-ply tyres, and they roused plenty of interest and fond memories.

Burra resident Greg Hedger, who responded to a request put out on ABC Radio's Gardening Show in February, was the man responsible for repatriating the landscape with the once-popular garden ornaments....

Mr Hedger said each swan took about an hour to fashion - once he had the design sorted - plus a bit of time for painting. The tyres were heated by engine exhaust or in a glasshouse so the rubber was easier to cut and twist inside out.

The tyres were sourced from a company in Melbourne, which was believed to have held a stockpile for use as swings. While the steel belting in a modern radial tyre is good for motorists, it does not wear safely in children's swingsets. Neither is it suitable for swan sculpting, because it's too difficult to slice.

Sizes ranged from 12- and 13-inch car tyres to truck tyres. Mr Hedger's offerings have been planted with a new variety of pansy, named Waterfall.

After the festival, Mr Hedger intends to take the swans under his wing. While the Floriade examples are under offer - Mr Hedger's wife has her name on two - he'll take up the slack afterwards. He's already had orders from ladies in Burra and Orange and a school in Armidale. He had no idea what the swans would sell for, but would probably charge less than $100 apiece
Posted by Cathy Parry at 4:36 pm No comments: 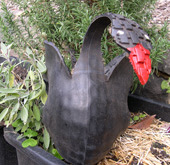 Are you enticed by the mystery of the tyre swan?
Well now you can relax, Ron D Swan the Tyre Swan, has set up this blog to document the remaining tyre swans across Australia and possibly the world.
He looks forward to your contributions of photos and stories.
Please include the current location and any information you know about your tyre swans history.
Ron's email is industrialsewingworkshop@gmail.com